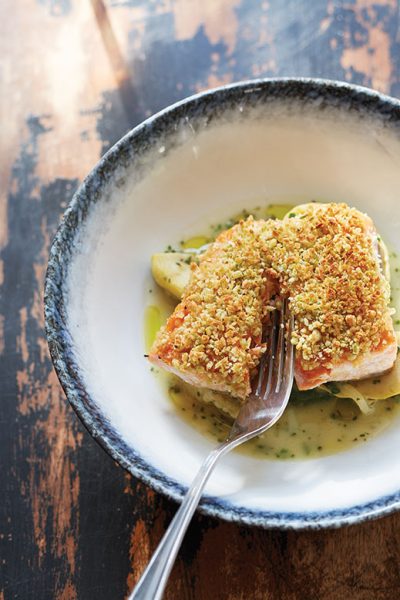 Downtown Jersey City’s restaurant boom keeps hoisting up marquees as fast as sign makers can produce them. Whether the theme is gelato, burgers, barbecue, tapas, cocktails, French bistro or pizza, the approach is artisanal. The menus and tabs fit the clientele: young, aspirational and urban.

Into this hotbed of hipness steps Ryan DePersio, 38, one of North Jersey’s best-known and most successful chefs. Last February he opened the Kitchen Step, an affordable New American bistro with Italian accents in downtown’s scruffy-but-elegant Van Vorst section. It clicked with locals from day one, partly because it was the perfect antidote to the restaurant it replaced—Thirty Acres, which earned raves for its esoteric cuisine but eventually lost touch with (and perhaps interest in) the people it ostensibly served.

The Kitchen Step is DePersio’s fourth venture, joining his family’s 13-year-old Montclair flagship, Fascino, a BYO with a modern Italian menu; NICO at NJPAC in Newark, which DePersio oversees; and Battello, the huge, glass-clad restaurant and event space on the Jersey City waterfront, with its breathtaking views of Lower Manhattan and weddings booked most Saturday nights.

Though the Step, as DePersio and regulars call it, draws staff and culinary bloodlines from Battello and Fascino, it is a serendipitous creation, perfectly attuned to its time and place.

“I’d been wanting to open a relaxed neighborhood place in Jersey City,” says DePersio, who grew up in Nutley. “I was thinking about the homey little corner bistros my parents used to take me to in [Manhattan’s] West Village.” When the owners of Thirty Acres decided to sell and move home to Seattle, DePersio’s ears perked up. Negotiations didn’t click—until suddenly they did. “It happened fast,” he says. “One Friday I got a phone call that turned into a lease on Monday.”

DePersio, partner Joe Calafiore and consultant Cory Checket acquired the liquor license along with the space, and they’ve done good things with both. Bar manager Ray Keane, a Battello alum, has fashioned a small but fun list of new and classic cocktails, craft beers and food-friendly wines. They warmed up the space with a vintage chandelier over the bar and a series of large, ceiling-mounted paintings depicting a branching, increasingly leafy tree. Most importantly, DePersio and chef de cuisine Colleen Pryor [Editor’s Note: December, 2016, Battello alum Roberto Carnero is now chef de cuisine], created a menu as varied and pleasing as it is small—just 25 items, including desserts.

I enjoyed the Step’s $19 ricotta gnocchi, altered from Fascino, Battello and NICO versions by a supporting cast of ratatouille, tomato jus and ricotta salata. Even better was a $9 small plate of ambrosial marinated golden beets with red quinoa and oat granola for crunch and yogurt with mild Basque Espelette peppers for creaminess and spark. It’s also on the brunch menu, making it a bit of heaven to wake up to.

The Step’s lush gazpacho, featuring two plump poached shrimp, was the best I’ve had outside Spain. Its Jersey tomatoes are puréed with red bell peppers, cilantro and garlic and thickened with crusty bread, cantaloupe and bits of cucumber and pickled red onion. Among several shareable small plates, the crowd pleaser was Colleen Pryor’s $9 pan of cheddar mac and cheese with shredded chorizo topped with browned bread crumbs and pepper chutney drizzled with olive oil. Crab crostini, though, were underseasoned, and bits of duck confit on a frisée salad were dry and scanty, especially compared to the generous shower of meatier confit the same salad had in the Step’s early days.

About that name: It’s a nod to a storied slab of marble that Cornelius Van Vorst, mayor of Jersey City from 1860 to 1862, used as a step between the kitchen and garden of his mansion down the street. Back in 1776, American patriots had liberated the slab from under a statue of King George III they tore down in Lower Manhattan. The slab eventually turned up in Jersey City, marking the grave of a British general. It was later uncovered by workmen, who sold it to the Van Vorsts. Its history earned it the sobriquet “cornerstone of liberty.”

The Kitchen Step’s menu has more than one cornerstone. Seafood is one. A 6-ounce fillet of grilled Scottish salmon arrived blessedly moist and rich under a crust of finely chopped green olives mixed with panko bread crumbs. Though pleasingly crunchy, the crust had surprisingly little olive flavor. But the herbaceous Provençal barigoule broth underneath was a treasure. A seared branzino fillet had crispy skin and tender, flavorful flesh. The trick with the thin fillet, DePersio says, is “to do 90 percent of the cooking on the skin side.” A garlicky brown butter on the side enhanced not just the fish, but the dish’s smashed fingerling potatoes.

Meat mains were equally good. The Step’s juicy, 14-ounce pork chop, from J. Vrola Meats in South Amboy, is brushed with a glaze of pomegranate, jalapeño, ketchup and brown sugar that caramelizes on the flat-top grill and imparts a smoky note. It comes with toothsome spaetzle, the dough enriched with brown butter, a trick DePersio says he learned under chef Bill Telepan at Manhattan’s Judson Grill.

The excellent Black Angus hanger steak is grilled, sliced and served with a lip-smacking chimichurri. The side of grilled corn on the cob is brushed with honey and rolled in grated ricotta salata standing in for Mexican cotija cheese. The 8-ounce RD Burger, also served at Battello, is a blend of chuck, short rib and brisket from J. Vrola. It’s piled with aged Irish cheddar, applewood-smoked bacon and a sweet onion compote and is served with fries.

Moroccan-braised chicken, a bone-in leg and thigh, had star power. Credit its fragrant North African spice mixture, rich with cumin, turmeric, fennel, paprika and cinnamon. It’s served not with the couscous you might expect but with nutty cracked bulgur simmered in chicken stock with currants, chickpeas, green olives, sweet onions and carrots for a heady sense of Casablanca by the Hudson.

You don’t have to be vegetarian to swoon over the portobello entrée. The dark, meaty caps, glazed with miso and soy, are roasted and served in a mildly spicy coconut broth. But a tag team of carrots steals the show: under the mushrooms, a bright, luscious carrot purée; on top, a delightful tangle of crispy fried carrot strips.

Some of Joseph Gabriel’s pleasing desserts make effective use of old-fashioned grains. His warm blueberry cobbler had a rewarding pistachio-oat streusel. Vanilla risotto pudding, made with arborio rice, was chewier than, yet not clearly superior to, deli rice pudding, but its warm brandied-cherry-and-apricot topping was seductive. DePersio, who early on worked for the great Jean-Georges Vongerichten, recalls, “Jean-Georges used to tell me, ‘Make the dish sexy.’” Overall, the Kitchen Step does pretty well in that regard.